Posted at 11:06h on 20 Aug in Foodie Friday by The Newport Foodie
0 Likes
Share

Ever have crazy days when you just don’t have time to wait 10 hours for pulled pork or shredded beef for your tacos? I do… all the time! It’s times like these that prove Newport Avenue Market’s got my back!

If you’re like me, you have days you are so bombarded with tasks and chores that you completely forget about dinner. Fret not, my friends, because I am sharing a quick dinner solution for you in the form of TACOS!

Let’s get to shopping… 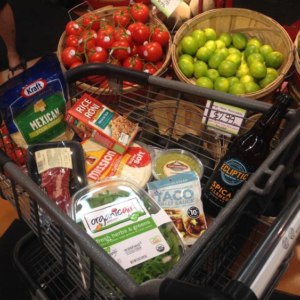 What’s in the cart?

From the produce department, I picked up a package of Organic Girl’s Fresh Herbs & Greens. I chose this specific blend because it has cilantro already mixed in with the greens! Gotta get your greens on your plate, right?

A short walk away, you can find Mary’s Harvest Fresh Guacamole because there’s no way we’re eating tacos without some guac. In the west corner of the store, there’s a mind-blowing selection of cheese, including some real Mexican cheese. But, you know, time constraint and all – I just don’t have time to shred cheese, so I opted for some good ol’ Kraft Mexican Four Cheese Blend.

While there are plenty of options at Newport Avenue Market for tortillas, I went with the tried-and-true Mission Flour Tortillas, because I prefer flour over corn. And, since we’re in a rush, any of Frontera’s Taco Skillet Sauces are just what we need to add that authentic gourmet taste to our steak. My favorite is the Chipotle Garlic with Roasted Tomato and Red Onion. The best part about Frontera’s Taco Sauces is you just need to grab a pound of steak and an onion, cook as directed on the package and voila – tacos that can rival some of the authentic taco stands we have around here!

If you’re wondering what meat to use for your tacos, Jersey from the Meat Department suggested Skirt Steak, which is also one of the three steaks suggested by Frontera’s Chef, Rick Bayless. His other two choices were Rib Eye or New York Steaks.

But wait – let’s not forget the rice! The quickest way for me to have it is to pick it up from the service deli (no luck that day!) or good ol’ Rice-a-Roni. As it turns out, Newport Avenue Market carries Spanish and Mexican Rice-a-Roni, so the obvious choice for Taco Night, for me anyway, was the Mexican Rice variety.

Need some help washing the food down? Steve from the Beer & Wine Department suggested a pilsner to pair with steak tacos. He handed me a bottle of Ecliptic Spica Pilsner. Ashley Routson (also known in the craft beer community as The Beer Wench) echoed pilsner as a classic pairing with tacos! If beer aficionados tell us so, it IS so. Pilsner and Tacos = a great dinner!

And a great dinner it was! Prepped in less than 30 minutes and devoured in less time than that.

About our Foodie: Ana Balbin is Newport Avenue Market’s Loyalty Marketing Director and self-appointed “resident foodie.” She spends countless hours reading recipes online and watching culinary shows and documentaries while daydreaming of going to Europe and Asia to extensively learn more about their cuisines. She is a chronic instagrammer and a voracious snacker.